- You are at our school as an assistant to help pupils and teachers who are working in the Comenius Project. How did you get to take part in the project?
- I got into a project of the European Union for teachers who don´t have too much experience; you have to apply for Comenius assistantship project and they accept you. I chose the country but not the city. They assigned me the town of Ferrol, so I came here.

- How long have you been in Spain?
- I´ve been here since the 22nd of October and I´ll be here until the 15th of June.

- What´s your opinion about Galicia?
- I´m from the northern Europe, from Lithuania and from there, when we thought about Spain, we imagined flamenco, beaches, sun, bullfighting, “sangria”… (laughters). The only thing I knew of Galicia was The road to Santiago and its history and things like that. Later, when I went to the Canary Islands I was told more things about Galicia. They told me about the rain, about the Galician milk, that is exported all over Spain, about “Estrella Galicia”; by the way, I like it very much (laughters). I think Galicia is similar to Lithuania in the green landscape, and it´s different the seafood…. People are more open and live more quietly. In Lithuania  everything goes fast, there is a lot of stress.

- Had you ever been to Spain before?
- Yes, I had. The first time I came to Spain, I went to the Canary Islands, where I was living for a year. After that, I visited “La Costa del Sol”…. I think I visited quite a lot of places in Spain.

- Do you like to be at this school?
- Yes, definitely. I think the work is very organised. When I arrived, I was a bit afraid but everybody helped me from the beginning. Everybody is very kind and helps me.

- How do you feel working with us?
- At first it´s always a shock to change your country, but not so much here in Ferrol because I had already been to the Canary Islands. Although at first I was scared that, for example, pupils made fun of me since they´re teenagers, you know, but now I feel really happy.

- I think you have some problems with the pronunciation. Where do you think the English level is higher, in Lithuania or here?
- I think in Lithuania the level is better…

- What languages do Lithuanian pupils usually learn?
- The first language is, of course, English and later children can choose between French, German or Russian.

- Do you think Spanish language is difficult to learn?
- No, I don´t think so. Definitely, it´s not a difficult language. The most difficult  for me is to distinguish between feminine and masculine. 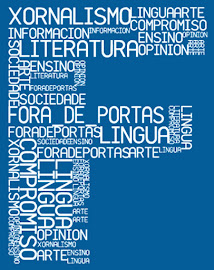